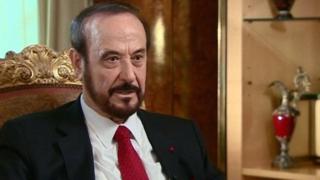 The uncle of Syrian President Bashar al-Assad has been sentenced to four years in prison by a Paris court for money-laundering.

Rifaat al-Assad was convicted of embezzling Syrian state funds to buy homes and offices worth €90m (£80m) to build a French property portfolio.

The 82-year-old former vice-president denies any wrongdoing. His lawyers say he will appeal.

His property assets in Paris and London will be seized, the court ruled.

Assad, who was hospitalised with internal bleeding in France in December, was not in court for the ruling. His London property is believed to be worth €29m (£26m).

Who is Rifaat al-Assad?

He was once the second most powerful man in Syria – the military commander at the right hand of his brother Hafez, who led Syria from 1971 until his death in 2000.

Rifaat is known as the “Butcher of Hama” by some Syrians because of his alleged role in the bloody suppression of an anti-government uprising in the city in 1982 but he has denied any responsibility for the massacre. Between 10,000 and 20,000 people are estimated to have died.

Since 1984, when he led a failed coup against his brother, Rifaat has mostly lived in exile in France and Spain.

After Hafez died in 2000, Rifaat proclaimed himself his brother’s legitimate successor. But Bashar became president.

When Syria descended into civil war in 2011 he called on his nephew to step down.

His lawyers say his political past is irrelevant to an investigation into his financial activities.

What is the case about?

Rifaat al-Assad has been under investigation in France since 2014, when the legal NGO Sherpa, which defends victims of alleged economic crimes, filed a complaint saying the value of his property empire far exceeded his known income.

Five years later, the French judicial authorities decided that he should stand trial for crimes allegedly committed between 1984 and 2016, including organised money laundering, aggravated tax fraud and misappropriation of Syrian state funds.

The trial opened on 9 December last year. Assad denied the charges, saying he was given gifts by the Saudi royal family.

The properties were seized by the Spanish authorities in 2017 as part of a separate investigation into alleged money-laundering activities by Assad and 13 other people, who have again denied any wrongdoing.

This is the second trial of a member of foreign ruling family in France on charges of “ill-gotten gains”.

Islamabad, Pakistan – Pakistani authorities have arrested Shehbaz Sharif, leader of the opposition and president of the country’s main opposition party, on corruption charges, the latest high-profile arrest of an opposition figure by Prime Minister Imran Khan’s government. Sharif was arrested from the premises of the high court in the eastern Pakistani city of Lahore […]

By Swati Pandey SYDNEY (Reuters) – Australia’s central bank was worried about the potential for a “very material contraction” in economic activity when it unveiled quantitative easing in an emergency meeting last month, minutes released on Wednesday showed. The Reserve Bank of Australia (RBA) held an out-of-cycle meeting on March 18 when it reduced its […]

Hero mum, 24, crushed between two cars while carrying baby on trip to Aldi

Improving Investor Behavior: This spring, grow your garden and your finances – The Denver Post

This is another News Portal > World News > U.S. transport chief said economic issues not a factor in 737 MAX’s safety review