WASHINGTON (Reuters) – Asian stocks were set to climb on Wednesday after another late Wall Street surge in response to upbeat trial results for a COVID-19 treatment and data showing U.S. consumers spent big in May. 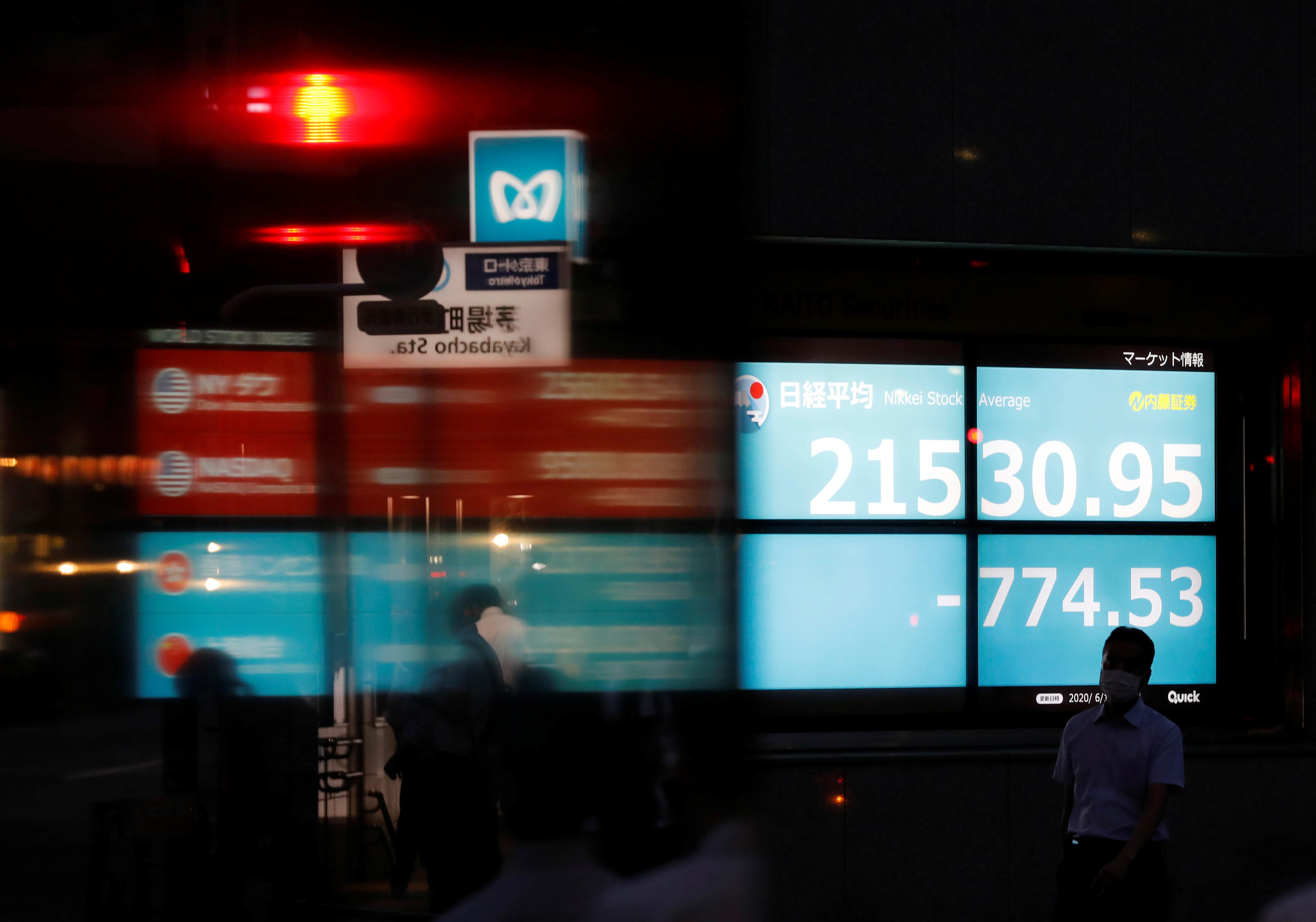 The prospects of fresh support from the Federal Reserve and Bank of Japan also supported global equity markets.

“It was a trifecta of positives today,” said Jeffrey Carbone, a partner at North Carolina-based Cornerstone Wealth, referring to the U.S. data, drug trials and central bank promises.

The upbeat sentiment weighed of U.S. Treasuries and supported demand for lower-rated southern European debt. Not everyone was in the mood for risk, however, with safe-have gold pushed higher on news of a fresh coronavirus outbreak in China.[GOL/]

“We got potentially more positive news in the fight against COVID-19,” said Ryan Detrick, senior market strategist at LPL Financial in Charlotte, North Carolina. “But while COVID is in most people’s minds, in the stock market’s view it is all about reopening and the strong data suggest the recovery is happening and faster than most expected.”

At the beginning of his two-day testimony before Congress, Fed Chairman Jerome Powell said a full recovery was unlikely until the public is confident the disease had been contained.

U.S. retail sales jumped a record 17.7% in May, blowing past the 8% increase analysts expected and supporting views the U.S. recession might be drawing to an end.

On Wall Street, the Dow Jones Industrial Average rose 2.0%, the S&P 500 gained 1.9% and the Nasdaq Composite added 1.8%. That followed a broad 3% rally in major European bourses.

The MSCI’s gauge of stocks across the globe gained 2.2%.

Germany’s monthly ZEW investor sentiment survey showed investors are confident that Europe’s largest economy will be over the worst of the coronavirus impact by the end of the European summer.

The British pound rose on unemployment numbers that were not as bad as feared and friendlier Brexit talks.[GBP/]

The BOJ increased its lending packages for cash-strapped firms to $1 trillion from about $700 billion, while keeping rates steady, sticking to its view that the Japanese economy will gradually recover from the pandemic.

German, French, Dutch and other core yields also rose. Riskier Italian yields fell to their lowest level since the end of March, and the iTraxx European crossover index, which reflects the cost of insuring against junk-rated corporate bond defaults, fell to its lowest level in six days. [GVD/EUR]

‘Can you take yourself off mute’: Diplomacy in the time of Covid

The 28th floor of the Majestic Centre provides spectacular views of the capital from Wellington’s tallest building, but until a few weeks ago, visitors would usually find management training courses or an investment fund presentation. Now the space is the heart of Apec 2021, the annual summit of 21 Pacific rim economies where officials and […]

Recent Sale $3.2 MILLION 2383 Washington Avenue (between East 186th and East 187th Streets) The Bronx Built in 1911, this five-story, 23,365-square-foot building in the Belmont neighborhood has 24 apartments and two retail spaces, all occupied. All the apartments are rent-stabilized except for one, which is rent-controlled. Buyer: 2383 Washington Seller: GRR Camaj Brokers: Lev […]

Success in sports often boils down to that split-second reaction on the field and the training it took to be ready for it.  Turns out, the same is true in the sports business.  Witness Fanatics, where chief executive officer Doug Mack has built an agile giant, ready to spring into action when an athlete makes the […]

Why Our Monsters Talk to Michael Wolff