The US Air Force said the F-15C Eagle from the 48th Fighter Wing was on a routine training mission when it crashed. 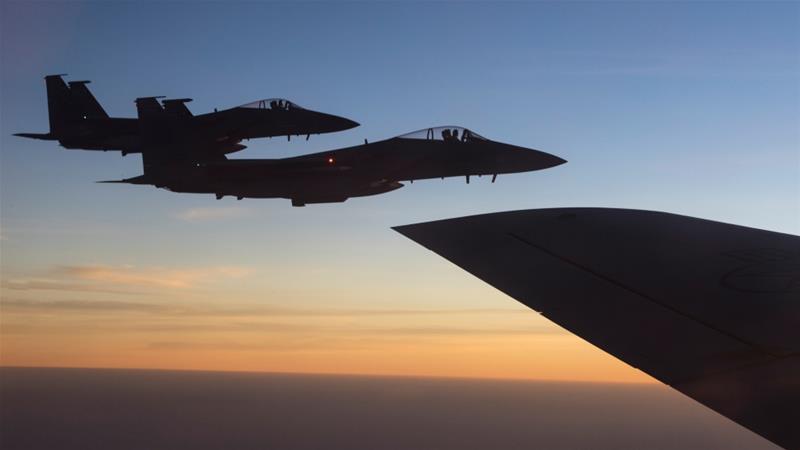 A United States fighter plane has crashed off the coast of northeast England, sparking a search and rescue operation for the pilot in the North Sea.

The US Air Force said the F-15C Eagle from the 48th Fighter Wing crashed on Monday at approximately 9:40am local time (08:40 GMT).

“At the time of the accident, the aircraft was on a routine training mission with one pilot on board,” it said.

“The cause of the crash as well as the status of the pilot are unknown at this time, and UK Search and Rescue have been called to support.”

The aircraft was from RAF Lakenheath, the largest US Air Force-operated base in England and the only US Air Forces in Europe – Air Forces Africa (USAFE) F-15 fighter wing. It is located about 40km (25 miles) northeast of Cambridge.

The Maritime and Coastguard Agency said it was coordinating the response.

“The HM Coastguard helicopter from Humberside has been sent along with Bridlington and Scarborough RNLI (Royal National Lifeboat Institution) lifeboats,” it said in a statement.

“Following a Mayday broadcast by HM Coastguard, other vessels nearby are heading to the area,” it said, adding that the plane went down 74 nautical miles (137km) off the East Yorkshire coast.

Citing a flight tracker website, Sky News television said the plane had circled in the area before disappearing.

Manufactured by Boeing, the single-seater F-15C entered US Air Force service in 1979, according to Janes security and defence group.

A total of 211 of the 409 aircraft produced are currently in service.

A US F-18 fighter jet crashed near the town of Ely, in eastern England, in October 2015, killing the pilot, after taking off from RAF Lakenheath.

The previous October, an F-15 from the base crashed into a field but the pilot ejected safely. In January that year, four airmen were killed when a US helicopter crashed during a low-flying training exercise.

LONDON (Reuters) – The British government’s debt office will ramp up its sales of gilts to raise 45 billion pounds ($55 billion) in April, reflecting a surge in borrowing and spending planned by finance minister Rishi Sunak to mitigate the economic hit from the coronavirus crisis. The Debt Management Office said on Tuesday it would […]

By Sharay Angulo MEXICO CITY (Reuters) – Fresh battle lines are being drawn that could lead to farm trade restrictions between the United States and Mexico, a letter from a top Mexican trade official seen by Reuters shows, despite the goodwill generated by the newly signed North American trade pact. In response to a letter […]

By Arno Schuetze FRANKFURT (Reuters) – German carrier Lufthansa <LHAG.DE> has been forced by the coronavirus epidemic to halt the sale of the international operations of its airline caterer LSG, the company said on Thursday, confirming an earlier Reuters report. Airlines around the globe are feeling the pain as travel demand withers because of the […]

Investing in Grab: 'It's about how CEO spoke to his mum'

This is another News Portal > Business > Investing in Grab: 'It's about how CEO spoke to his mum'