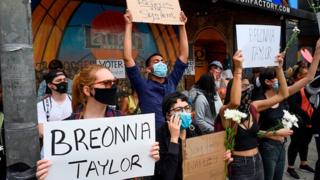 A city council in the US state of Kentucky has voted to ban no-knock warrants, passing a law named in honour of a woman who was shot dead by police.

Breonna Taylor, 26, was shot eight times when officers entered her apartment in Louisville on 13 March.

They were executing a no-knock search warrant as part of a drugs investigation.

A no-knock warrant is a search warrant approved by a judge that permits police to enter a home without permission.

Inside, the officers exchanged fire with Ms Taylor’s partner, but no drugs were found.

The exact events are disputed, as police say that despite the warrant, they did knock before raiding her address using a battering ram. Ms Taylor’s family and a neighbour have disputed this.

The ordinance, symbolically named “Breonna’s Law”, was put to a vote after calls for police reform at recent protests in the city and nationwide.

“I’m just going to say, Breonna, that’s all she wanted to do was save lives, so with this law she will continue to get to do that,” Ms Taylor’s mother, Tamika Palmer, said of her daughter, who was an emergency medical technician.

“She would be so happy.”

The legislation also requires Louisville Metro Police Department officers to wear body cameras while carrying out search warrants. The cameras must be activated at least five minutes before the warrant is executed, the law says.

Louisville Mayor Greg Fischer said he would sign the ban into law “as soon as it hits my desk”.

“I suspended use of these warrants indefinitely last month, and wholeheartedly agree with [the] council that the risk to residents and officers with this kind of search outweigh any benefit,” Mr Fischer tweeted.

Similar legislation that would ban the use of no-knock warrants nationwide was tabled by Republican Senator for Kentucky, Rand Paul, on Thursday. No-knock warrants are usually used for drugs raids by US police forces.

Taylor’s killing has been propelled into the spotlight again since the death of unarmed African-American man George Floyd, who died in police custody in Minneapolis, Minnesota in May.

Activists are calling on people to “Say Her Name” as part of a movement to remember black women who have not attracted the same attention as other cases.

Last week, when Ms Taylor would have turned 27, mourners gathered for a vigil in Louisville and people shared messages on social media, writing, “you should have been here to celebrate”.

Benjamin Crump, a lawyer for Ms Taylor’s family, thanked “every supporter, every protester, every young activist” who said her name after the law was passed on Thursday.

What’s the latest on the case?

The three officers involved in Ms Taylor’s killing have been placed on administrative leave during an investigation. None of them have been charged.

An investigation into the circumstances of her death opened by the FBI on 21 May is ongoing, CNN reported.

A new incident report about the night of the shooting was released by authorities on Wednesday.

The four-page document is virtually blank, containing few details that have not already been reported, according to CBS News. In it, Ms Taylor’s injuries are listed as “none”.

In a statement, the police department said it was “taking immediate steps to correct the report and to ensure the accuracy of incident reports going forward”.

“It’s issues like these that erode public confidence in Louisville’s police department, and its ability to do its job,” he said.

(Reuters) – Walt Disney Co <DIS.N> said on Wednesday that Disney+ has attracted more than 50 million paid users, with 8 million of them coming from India where the video streaming service was rolled out last week. Rival Netflix Inc <NFLX.O>, which has services available in over 190 countries, has nearly 167 million paid subscribers […]

Waitress’ chilling note that led to tortured boy, 11, being rescued from abusers

A heroic waitress's quick thinking saved an 11-yeah-old boy from the "torture" of his abusers when they all came into the restaurant she works in. Flavaine Carvalho said she was working on her day off at Mrs Potato Restaurant in South Kirkman Road, Orlando, Florida, US, on New Year's Day when she noticed at one […]

By Cynthia Kim and Hyonhee Shin SEOUL (Reuters) – South Korea’s government said on Wednesday it will increase restrictions on people traveling from overseas to prevent new coronavirus infections, and announced new stimulus measures for exporters hit by the outbreak. South Korea will temporarily suspend visa waivers for citizens of countries that have imposed travel […]