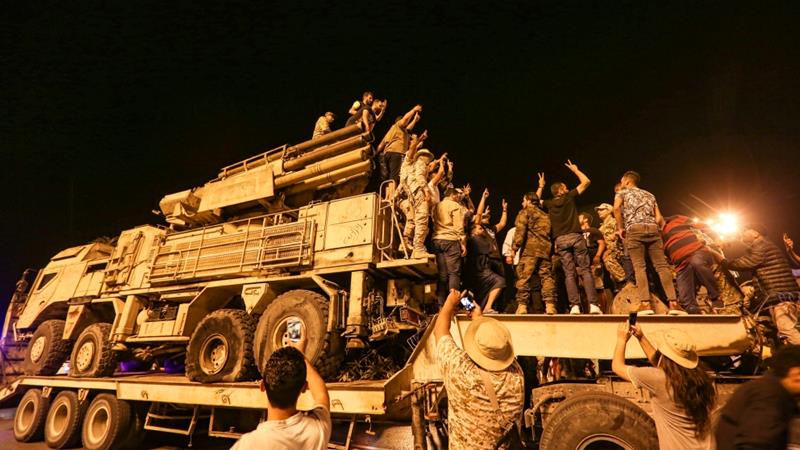 A Russian drive to recruit Syrians to fight in Libya for renegade military commander Khalifa Haftar accelerated in May when hundreds of mercenaries were signed up, five Syrian opposition sources and a regional source familiar with the matter said.

Private military contractor the Wagner Group is conducting the hiring with Russian army supervision, according to two senior Syrian opposition sources and the regional source. A former Wagner Group member said it first sent Syrians to Libya in 2019.

The Russian Defence Ministry and the Wagner group did not respond to questions from Reuters.

Turkey, meanwhile, says it is providing military support to the other side of the conflict, the internationally recognised Government of National Accord (GNA) based in Tripoli.

Turkish President Recep Tayyip Erdogan said in February that fighters from the Turkey-backed Syrian National Army were in Libya, as well as Turkey’s own military.

Russia has been a staunch ally of Syrian President Bashar al-Assad, helping him crush the rebellion at home. Moscow’s involvement in Libya is an extension of its ambition to project influence in the Eastern Mediterranean, some experts say.

Egypt and the United Arab Emirates have also lent support to Haftar because they suspect the GNA of having ties to the Muslim Brotherhood, an Islamist group they strongly oppose.

Turkey, on the other hand, has made deals with the GNA over maritime borders and wants to protect its interests in the region.

The involvement of Russia and Turkey on opposite sides of the Libyan conflict has echoes of the war in Syria, where they have also backed warring parties. It also risks exacerbating the conflict, experts have warned.

“Russia and Turkey are both escalating their firepower and force numbers in Libya, where Europe has been caught on its heels,” said Joshua Landis, head of the Center for Middle East Studies at the University of Oklahoma.

“Russia has tried to match Turkey’s effort to send Syrian mercenaries, but with mixed results.”

Wagner has up to 1,200 people deployed in Libya, according to a confidential UN report seen by Reuters in May. The Russian state has denied having forces in Libya.

When asked in January if the Wagner Group was fighting in Libya, Russian President Vladimir Putin said that if there were Russians in Libya, they were not representing the Russian state, nor were they paid by the state.

A spokesman for Haftar’s Libyan National Army denied it had recruited Syrian fighters. It has repeatedly highlighted the presence of Syrians fighting alongside its enemy.

US officials said on May 7 they believed Russia was working with al-Assad to transfer fighters and equipment to Libya.

The Syrian government’s information ministry did not respond to questions sent via email.

Haftar’s adversary, the GNA, has been supplied with drones, air defences and advisers from Turkey.

GNA deputy defence minister Saleh Namroush said its request for military support was in response to what he called “international meddling in Libya”.

“Turkey is the only country that was willing to help us end the widescale civilian killing and destruction by the UAE, Russia and others,” he said.

New recruits to the Russian effort in support of Haftar included 300 from the Homs area, among them former Free Syrian Army fighters, according to one of the two senior opposition sources, and some 320 from the southwest, a third source said.

The pace of hiring increased as Libya’s fighting intensified and the war in Syria died down, the regional source said.

According to the Syrian Observatory for Human Rights, which reports on the Syrian conflict using a network of sources on the ground, more than 900 Syrians were recruited by Russia to fight in Libya in May.

The fighters are trained at a base in Homs before going to Libya, according to the sources, who cited salaries ranging from $1,000 to $2,000 a month.

The movement of fighters into Libya violates a UN arms embargo and the UN’s acting Libya envoy on May 19 urged the Security Council to stop “a massive influx of weaponry, equipment and mercenaries”.

Many former Syrian rebels stayed behind in areas recovered by Damascus and its Russian allies, signing agreements that required them to pledge loyalty to the state. But their lives remain tightly restricted and monitored by the authorities.

Since 2014, Libya has been split between areas controlled by the Tripoli government and territory held by Haftar’s eastern-based forces in Benghazi.

Haftar is supported by Russia, the United Arab Emirates and Egypt, according to UN experts and some security sources. The countries deny direct involvement in the conflict.

Despite this backing, forces loyal to the GNA captured Haftar’s last major stronghold near Tripoli on Friday, capping the sudden collapse of his 14-month offensive on the capital.

On Thursday, Erdogan vowed to ramp up Turkey’s support for its ally in Libya to lock in the gains. On Saturday, Haftar was in Egypt, where President Abdel Fattah el-Sisi announced a new peace plan.

The retreat, reversing many of Haftar’s gains from last year, extends the GNA’s control of most of northwest Libya.

Haftar and allied groups still control the east and much of the south, as well as most of Libya’s oil fields, however.

By Helen Coster (Reuters) – Walt Disney Co’s <DIS.N> Robert Iger will step down as chief executive officer, handing the reins to Disney Parks head Bob Chapek, the company said on Tuesday, ending years of speculation on who will take over Hollywood’s most powerful studio. Iger is still keeping a significant role at the company. […]

Refusing to be silenced, some Myanmar journalists work from shadows

(Reuters) – Hiding from Myanmar’s police, journalist Aung Marm Oo refuses to conceal his anger with the civilian government led by Nobel Laureate Aung San Suu Kyi as his country prepares for an election later this year. “Democracy is already dead,” the 37-year-old editor-in-chief of Development Media Group (DMG) told Reuters from a location he […]

Ruth Davidson v Nicola Sturgeon: Who do you back on future of Union? VOTE NOW

This is another News Portal > World News > EU puts anti-dumping duties on stainless steel from China, Indonesia and Taiwan