Report by WSJ says Washington is concerned airspace restrictions often force Qatari planes to fly over Iran, for a fee. 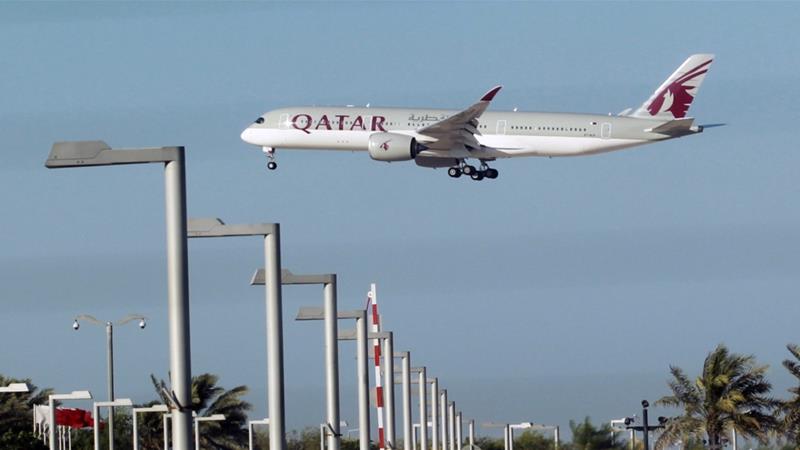 The United States has been pushing to resolve a nearly three-year diplomatic dispute between Qatar and its neighbours by pressing Saudi Arabia and the United Arab Emirates to stop their ban on Qatari airlines using their airspace, according to a report.

President Donald Trump has personally pressured the Saudi leadership to end the restrictions, which often force Qatari aircraft to use Iranian airspace as their only corridor out of the region, US and Gulf officials told Wall Street Journal.

The efforts included calls earlier this spring with Saudi King Salman and Crown Prince Mohammed bin Salman, the officials were quoted as saying on Wednesday.

Saudi Arabia, the UAE Bahrain and Egypt severed political, trade and transport ties with Qatar on June 5, 2017. The quartet continues to impose a land, air and sea blockade against their neighbour, accusing it of “supporting terrorism” – a charge repeatedly and vehemently rejected by Doha.

While the diplomatic dispute has complicated the US’s Middle East strategy, the Trump administration is particularly concerned over so-called “overfly fees” that Qatar pays to Iran to use the airspace, the officials told the Journal.

“There is a greater sense of urgency to resolve the airspace issue,” said one US official. “It’s an ongoing irritation for us that money goes into Iran’s coffers due to Qatar Airways overflights.”

Also of concern is the fact that many members of the US military regularly take commercial flights from Qatar, which fly over Iranian airspace, when going to and from Al Udeid Air Base, the largest US base in the region, according to the newspaper.

Tensions have escalated between Washington and Tehran since Trump withdrew the US two years ago from a landmark 2015 nuclear accord, in which Tehran had agreed to abandon its nuclear ambitions in return for sanctions relief.

The US has since reimposed crippling economic sanctions against Iran as part of a “maximum pressure” campaign.

The enmity has been further inflamed following the US assassination of Iranian General Qassem Soleimani in Iraq at the beginning of the year.

The Trump administration first appealed for the end to the airspace ban following the January 3 killing, the WSJ reported.

On January 8, Iran launched a missile attack against two bases in Iraq housing US troops, causing no fatalities. On the same day, with the Iranian military on high alert, Tehran’s forces accidentally shot down a Ukrainian commercial jet after taking off from the capital.

Meanwhile in February, Qatar’s foreign minister said efforts to resolve the Gulf crisis were not successful and had been suspended in January. The comments by Sheikh Mohammed bin Abdulrahman Al Thani came despite signs in previous months pointing to a possible thaw in relations between Saudi Arabia and Qatar.

Saudi officials see the airspace issue as their strongest negotiating point, and are loath to relent, a person with knowledge of the issue told the WSJ.

“Qatar only wants one thing: open sky, to be able to fly over,” said the person. “But if the Saudis give up flyover, there is nothing else Qatar wants. It is the Saudis’ only leverage.”

Qatar, meanwhile, has brought the issue to the United Nations in a series of cases that could force the blockading nations to pay large fines for isolating it.

Qatari officials have signalled they would drop the cases if the issue were resolved.

BRASILIA (Reuters) – Workers on strike at state-run oil company Petroleo Brasileiro SA <PETR4.SA> have temporarily suspended their stoppage and accepted mediation to resolve their dispute, the FUP union said on Thursday. The strike that began on Feb. 7 was called to protest against layoffs at a loss-making fertilizer factory in the state of Parana […]

FRANKFURT (Reuters) – German carmakers including Volkswagen <VOWG_p.DE> and Mercedes-Benz <DAIGn.DE> will restart production at some German factories next week after the country eased restrictions designed to contain the coronavirus outbreak. Chancellor Angela Merkel on Wednesday said that Germany has achieved a “fragile intermediate success” in its the fight against the coronavirus and that its […]

WASHINGTON (Reuters) – U.S. Senate Majority leader Mitch McConnell said on Wednesday the Senate would not haggle with the House of Representatives over procedures for President Donald Trump’s impeachment trial, adding that the Senate would make a decision on calling witnesses for the trial at the appropriate time. Speaking on the Senate floor, the Republican […]