BEIJING (Reuters) – Chinese state media has been revelling in days of chaotic protests in the United States and highlighting President Donald Trump’s threat to use troops, even as the anniversary looms of its own military crackdown on demonstrators 31 years ago. 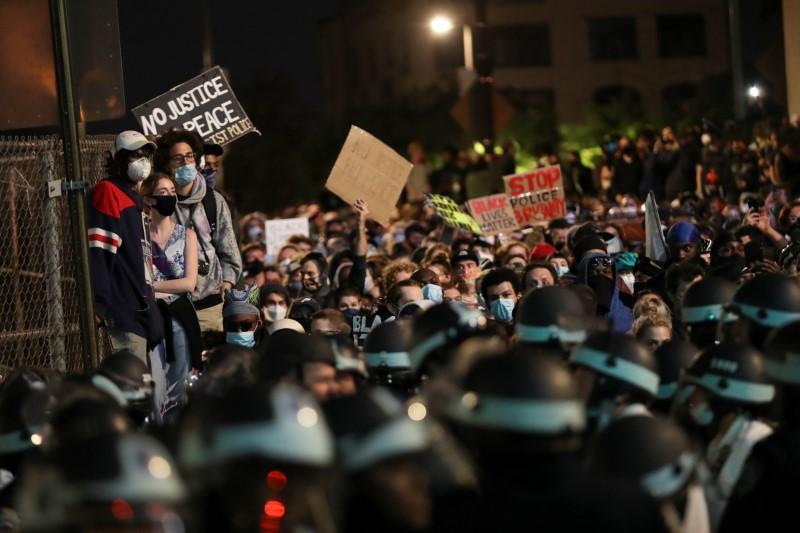 For days, Chinese media has prominently covered the protests in the aftermath of the Minnesota police killing of George Floyd, an unarmed black man, contrasting it with support from U.S. politicians for pro-democracy protests in Hong Kong.

Hu Xijin, editor of the Global Times, a nationalistic tabloid published by the ruling Communist Party’s People’s Daily, said the United States was marking the Tiananmen anniversary “in a unique way”.

“US military is being dispatched to the cities and police are opening fire. The US is proving the importance for China to restore order in 1989. But back then, the destruction of China’s order was much worse than US now,” he said in English on Twitter.

The June 4 anniversary of the shooting by troops of student demonstrators in Beijing’s Tiananmen Square in 1989, which rights groups and witnesses say may have killed thousands, is not publicly observed in the mainland and state media rarely mentions it in Chinese.

On Monday, Trump vowed to use military force if the U.S. violence was not quelled.

“China has shown patience toward the Hong Kong riots,” the Global Times wrote in an editorial, citing the security legislation as key to resolving the issue there.

“Does the White House believe that deploying the military can solve its deep-seated problems?”

China’s tradition of “magnifying social malaise” in the West comes amid heightened U.S.-China tension, said Yuan Zeng, a lecturer in Media and Communications at the University of Leeds.

“You can clearly see Chinese state media are using U.S. unrest to justify China’s move on HK National Security Law and to bash criticism from US,” she said in a text message.

A cartoon posted by the People’s Daily on social media depicted a policeman breaking off a Statue of Liberty cloaking, the sky in flames and the White House beneath him, under the Chinese caption “Human Rights”.

China has long been criticised by the United States and others over human rights, including its treatment of Tibetans and ethnic Uighur Muslims.

In April, several African ambassadors complained to Beijing over “inhuman” treatment of Africans in the city of Guangzhou during coronavirus containment.

“We hope the U.S. government will take concrete measures to fulfil its obligations under the international convention on the elimination of all forms of racial discrimination to protect the legal rights of ethnic minorities,” he said.

NEW YORK (Reuters) – AT&T Inc. <T.N> on Tuesday announced a $5.5 billion term-loan agreement, which it said would give the company “financial flexibility” during the coronavirus outbreak. The U.S. telecoms and media giant also reaffirmed its commitment to pay a dividend, which helped send its shares up 2.8% in morning trading. AT&T has been […]

A top civil servant in charge of housing Afghan refugees said her team have “been in tears” over the death of a five-year-old boy who fell from a hotel window. Mohammed Munib Majeedi fell from the ninth floor of the Sheffield Metropolitan Hotel where he was being housed with his Kabul embassy worker father and family […]

China 2019 GDP estimated to have grown more than 6%: Vice Premier Liu He

Christchurch shootings: How the attacks unfolded

Trump’s $4.8 trillion budget likely to get thumbs-down from Congress

Belarus migrants: ‘He beat us for three hours’ – the stories of asylum seekers trying to make it into Poland

This is another News Portal > World News > Locked-down Indian economy in its worst quarter since mid-1990s: Reuters poll