The Minneapolis riot over the death of an unarmed African-American man while in police custody has spread out of Minnesota, with seven people reportedly shot during a protest in Louisville, Kentucky. Protesters have been on the streets since Tuesday to demand justice for the death George Floyd, who died after a policeman handcuffed him and kneeled on his neck. Footage from the protests has shown some of the marchers have taken to stealing US Postal Service (USPS) cars.

One video shows what appear to be three men riding on the white USPS car as protesters film them and cheer them on.

All car windows were smashed in and the bonnet appears to have been spray-painted.

Footage from a twin protest in Louisville shows protesters assembling around a statue before people are forced to scramble away from the scene as several shots are fired.

The demonstration in Louisville also protested the violent death of Breonna Taylor, an Afro-American Emergency Medical Technician (EMT) who was shot by Police while at home with her boyfriend in March. 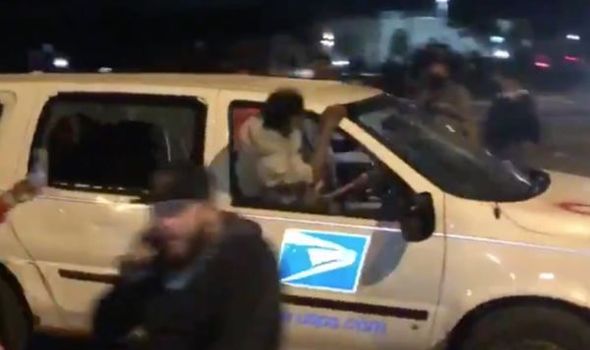 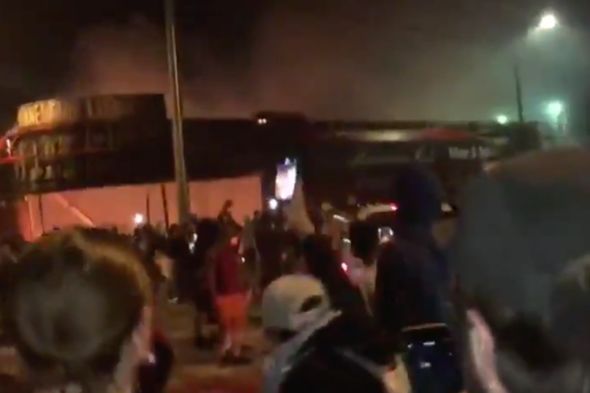 Thousands of protesters on Thursday surrounded a police precinct in Minneapolis and set in on fire.

The widespread protest in Minneapolis resulted in US President Donald Trump warning he is ready to send in the Army to support local police control the demonstrations.

Writing on Twitter, President Trump said: “I can’t stand back & watch this happen to a great American City, Minneapolis. A total lack of leadership. Either the very weak Radical Left Mayor, Jacob Frey, get his act together and bring the City under control, or I will send in the National Guard & get the job done right…..

“These THUGS are dishonoring the memory of George Floyd, and I won’t let that happen. Just spoke to Governor Tim Walz and told him that the Military is with him all the way. Any difficulty and we will assume control but, when the looting starts, the shooting starts. Thank you!”

Minneapolis mayor Jacob Frey immediately hit back at the president, insisting his city will overcome the time of crisis.

Mr Frey said: “Weakness is refusing to take responsibility for your own actions. Weakness is pointing your finger at somebody else, during a time of crisis.

“Donald Trump knows nothing about the strength of Minneapolis. We are strong as hell.

“Is this a difficult time period? Yes. But you better be damn sure that we’re going to get through this,” he said.

The protests erupted after Hennepin County Attorney Michael Freeman said they must look at all evidence before bringing charges to the police officers.

Mr Freeman told reporters: “My job, in the end, is to prove he violated a criminal statute.

“And there is other evidence that does not support a criminal charge.

“We need to wade through all of that evidence and come to a meaningful decision and we are doing that to the best of our ability.”

The four officers involved in Mr Floyd’s death were fired this week and the incident is being investigated.

By Daniel Leussink TOKYO (Reuters) – Japan’s industrial output slipped for the second straight month in November, raising the likelihood the economy will contract in the fourth quarter due to slowing demand abroad and at home. Japan’s economy has cooled in recent months due to a prolonged hit to exports from soft global demand and […]

US President Donald Trump says the World Health Organization (WHO) has mismanaged and helped to cover up the spread of the coronavirus after it emerged in China. But the WHO has defended its handling of the early stages of the pandemic. We’ve been looking at some of the charges President Trump has levelled against the […]

By Lucia Mutikani WASHINGTON (Reuters) – The number of Americans filing for unemployment benefits rose modestly last week, suggesting sustained labor market strength that could help to support the economy amid risks from the coronavirus and weak business investment. There was encouraging news on the struggling manufacturing sector, with other data on Thursday showing factory […]

AT&T asks employees to work from home amid virus fears

‘So high’: Tesla shares cross $420 mark over a year after Musk buyout tweet

This is another News Portal > World News > Trump says coronavirus guidelines may get tougher; one million Americans tested