HONG KONG (Reuters) – Hundreds of riot police took up posts around Hong Kong’s legislature overnight, as protests were expected on Wednesday over a bill criminalising disrespect of China’s national anthem and against plans by Beijing to impose national security laws. 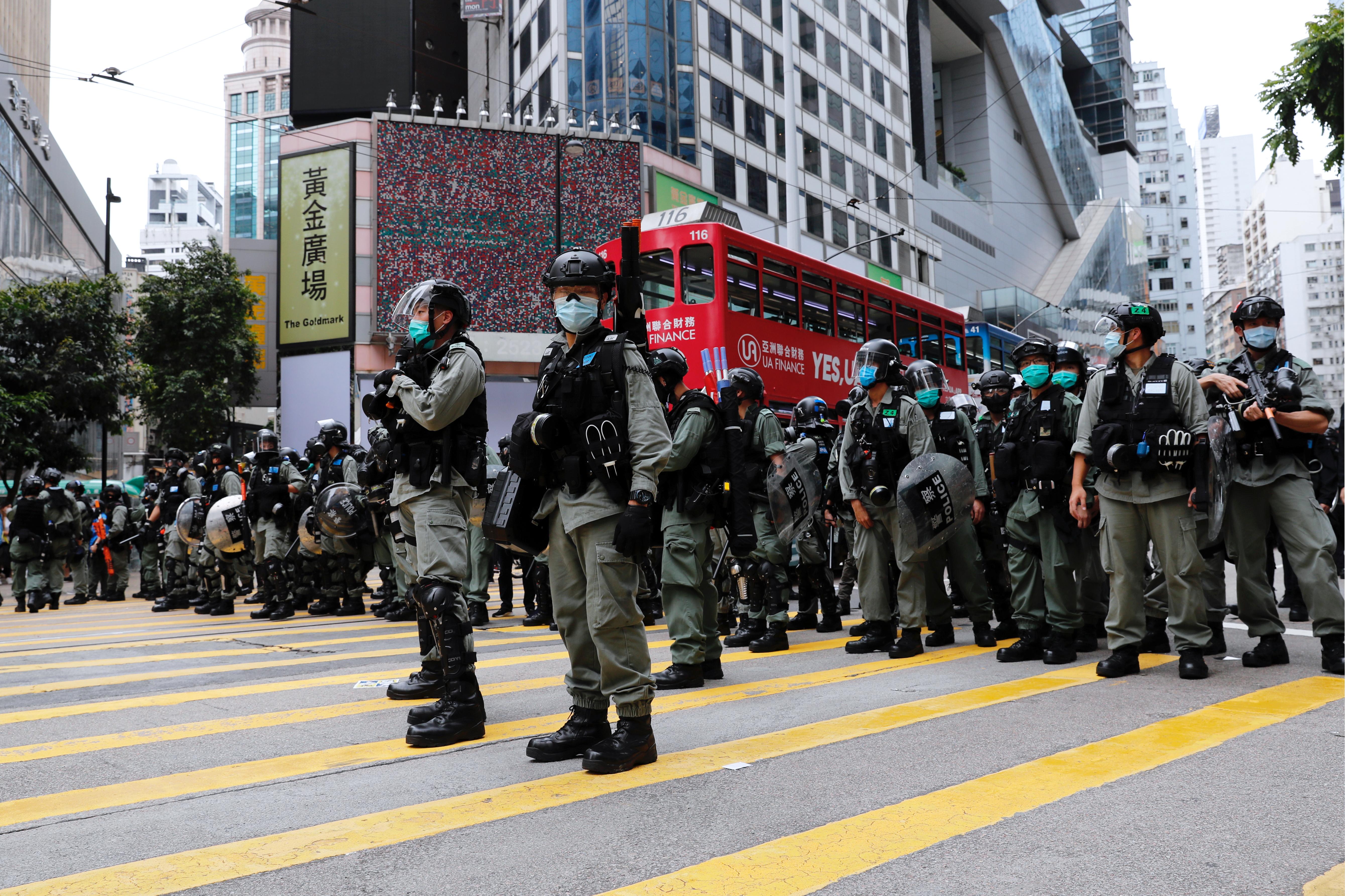 The proposed new national security laws have triggered the first big street unrest in Hong Kong since last year, when violent protests posed Hong Kong’s biggest crisis since the return of Chinese rule in 1997 from Britain.

Activists say the security laws could bring an end to the autonomy of China’s freest city, now guaranteed under a policy known as “one country, two systems”.

Diplomats, trade bodies and investors have also raised alarm. Thousands of protesters clashed with police on Sunday in the first big demonstrations since last year.

As he headed into the metro station next to the Legislative Council, known as Legco, 23-year-old Kevin said he was worried about what he called increasing Beijing assertiveness.

“The idea of one country, two systems is broken,” he said after a late dinner at McDonald’s. “China said it would stick to that agreement, but that’s not the case.”

Authorities erected a wall made of two-metre-tall (6 feet), white and blue plastic barriers filled with water around Legco, extending across a nearby park up to the picturesque Victoria Harbour.

Around midnight, riot police roamed the park, with squads stationed outside Legco and the neighbouring Central Government Offices building. Several police vans were parked on nearby roads.

In Washington, President Donald Trump’s economic adviser said on Tuesday that China was making “a big mistake” with the planned security legislation and pledged the U.S. government would pay expenses of American firms that wanted to shift operations from Hong Kong or China.

White House spokeswoman Kayleigh McEnany told a briefing that Trump was displeased with Beijing over the security law and finds it “hard to see how Hong Kong can remain a financial hub if China takes over.”

The anthem bill is set for a second reading on Wednesday and is expected to be turned into law next month. It requires China’s “March of the Volunteers” to be taught in schools and sung by organisations, and imposes jail terms or fines on those who disrespect it.

Opponents say it represents another example of Beijing encroaching on Hong Kong, while supporters say the city has a duty to ensure national symbols are treated respectfully.

Hong Kong and Beijing authorities have issued repeated statements insisting there is no risk to the city’s high degree of autonomy, urging patience until the laws are finalised.

Hong Kong police issued a warning late on Tuesday that they would not tolerate disruptions to public order, after activists circulated calls online for protests on Wednesday.

The security legislation could pave the way for mainland security agencies to open up branches in the global financial hub. It targets secession, subversion, terrorism and foreign interference – terms that are increasingly used by authorities to describe last year’s pro-democracy protests.

NEW YORK (AFP) – Rapid population growth and global warming are increasing exposure to extreme heat in cities, aggravating health problems and making moving to urban areas less beneficial for the world’s poor, according to a study released Monday (Oct 4). The rise is affecting nearly a quarter of the world’s population, said the report […]

LONDON (Reuters) – Britain’s biggest automaker Jaguar Land Rover <TAMO.NS> plans to keep making vehicles at its domestic factories until at least the end of the week despite the impact from coronavirus which has shut many other car plants. “All of our UK plants remain open and we plan to keep building cars until at least […]

Putin ‘trying to divide the west’ says Farage We use your sign-up to provide content in ways you’ve consented to and to improve our understanding of you. This may include adverts from us and 3rd parties based on our understanding. You can unsubscribe at any time. More info He tweeted: “Well, I was wrong. Putin […]

Trump, caught off guard by news of Ginsburg’s death