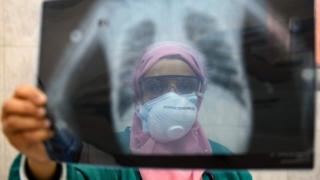 Doctors have accused Egypt’s health ministry of negligence in its handling of Covid-19 and said it bears “full responsibility” for medics’ deaths.

A union said on Monday that 19 doctors had so far died from the disease and more than 350 others had been infected.

It blamed a lack of personal protective equipment and beds for sickened staff, and warned the system could “collapse”.

The health minister insisted sufficient protection had been offered and medics had received the “best possible care”.

Egypt, the most populous country in the Arab world, has so far reported 17,967 confirmed cases of Covid-19 and 783 associated deaths.

The doctors’ union said the deaths and infections among its members were the result of the health ministry “falling short” of doing its duty to protect them.

“The health ministry has an obligation towards doctors and all medics who are sacrificing their lives on the front lines to defend the safety of the homeland.”

“It is imperative to provide them with the necessary protection and rapid medical intervention for those who contract the disease,” it added. 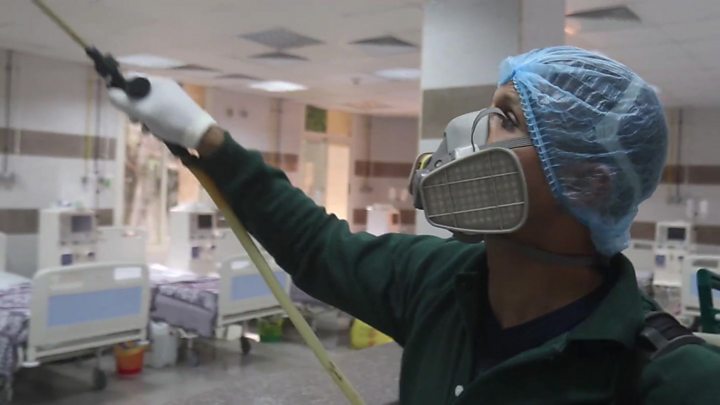 With the outbreak showing no sign of abating and quarantine hospitals running at capacity, the union warned that “the health system could completely collapse, leading to a catastrophe affecting the entire country if the health ministry’s negligence and lack of action towards medical staff is not rectified”.

In response, Health Minister Hala Zayed said that since the start of the outbreak, the ministry had “ensured the allocation of a floor in every quarantine hospital with a 20-bed capacity to treat those infected among medical staff”.

Staff were tested for the coronavirus upon entering and leaving hospitals, and there were “sufficient stocks” of personal protective equipment, she added.

Ms Zayed also stated that 11 doctors had so far died, rather than 19.

The union’s warning came two days after the death of a 31-year-old doctor, Walid Yehia, who was unable to get a bed at an quarantine hospital in Cairo.

“His colleagues and I were with him, appealing for help, but there was zero response,” his brother, Ashraf Zalouk, wrote on Facebook.

Social media users contrasted Dr Yehia’s treatment to that given to the actress Ragaa al-Gadawy.

The 81-year-old was tested quickly for the virus and admitted to a quarantine hospital in the city of Ismailiya based on the personal recommendation of the health minister, news websites quoted her daughter Amira Mokhtar as saying.

Ms Zayed has reportedly ordered an investigation into the death of Dr Yehia and promised to take “all legal measures in case of any shortcomings”.

By Richard Cowan and David Morgan WASHINGTON (Reuters) – Democrats in the U.S. House of Representatives said on Tuesday they would include new evidence when they send formal impeachment charges against President Donald Trump to the Senate on Wednesday, seeking to expand the scope of a trial that will dominate Washington for the next several […]

As President Donald Trump entered the final year of his term last January, the U.S. recorded its first confirmed case of COVID-19. Not to worry, Trump insisted, his administration had the virus “totally under control.” Now, in his final hours in office, after a year of presidential denials of reality and responsibility, the pandemic’s U.S. […]

By Howard Schneider WASHINGTON (Reuters) – Two former top staffers at the U.S. Federal Reserve have joined in urging the Fed to say explicitly what it will do if interest rates hit zero again, and warned that even with the best laid plan the central bank “might simply run out of…firepower,” if a downturn is […]

US extends economic aid to Greenland to counter China, Russia in Arctic

For U.S. small restaurants, coronavirus impact is swift and brutal

Smithfield Foods to restart South Dakota pork plant from May 7