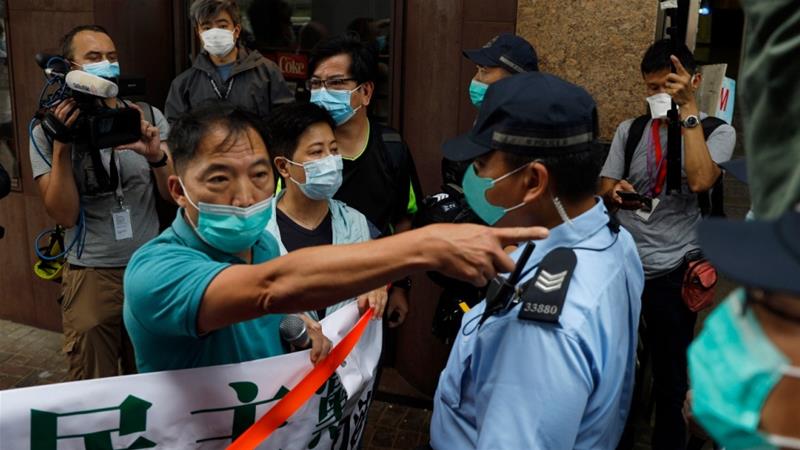 Hong Kong has braced on Sunday for its first protests since Beijing’s controversial plan to directly impose national security laws on the city, in what could provide a litmus test of public opposition to China’s tightening grip over the financial hub.

Beijing on Thursday proposed tough security legislation for Hong Kong, a move that sent a chill through financial markets and drew a swift rebuke from foreign governments, international human rights groups and some business lobbies.

In drafting the new laws, which could see the setting up of Chinese government intelligence agencies in the global financial centre, Beijing would be circumventing Hong Kong’s lawmaking body, the Legislative Council.

The move has sparked concerns over the fate of the “one country, two systems” formula that has governed Hong Kong since its return to Chinese rule in 1997 and which guarantees the city broad freedoms not seen on the mainland.

Some local commentators have described the proposal as “a nuclear option” that is part of Chinese President Xi Jinping’s high-stakes power play.

A backlash intensified on Saturday as nearly 200 political figures from around the world said in a statement the proposed laws are a “comprehensive assault on the city’s autonomy, rule of law and fundamental freedoms”.

“If the international community cannot trust Beijing to keep its word when it comes to Hong Kong, people will be reluctant to take its word on other matters,” they wrote.

The statement, which was also signed by Hong Kong’s last British governor, Chris Patten, said the proposed law is a “flagrant breach” of the Sino-British Joint Declaration that returned Hong Kong to China in 1997.

China has dismissed other countries’ complaints as “meddling” and rejected concerns the proposed laws would harm foreign investors.

On Saturday, Hong Kong media reported police were seen entering Beijing’s main representative bureau in the city, the Liaison Office, ahead of protests expected to start later in the bustling shopping district of Causeway Bay.

The rally was initially organised against a controversial national anthem bill, which is due for a second reading at the Legislative Council on Wednesday. The proposed national security laws sparked calls for more people to take to the streets.

Hong Kong has increasingly become a pawn in deteriorating relations between Washington and Beijing, and observers will be watching for any signs of acceptance among the broader local community or indications that activists are gearing up for a fresh challenge.

Anti-government protests that escalated in June last year plunged the city into its biggest political crisis in decades, battered the economy and posed the gravest popular challenge to President Xi since he came to power in 2012.

The sometimes violent clashes that roiled the city saw a relative lull in recent months as the government imposed measures to curb the spread of coronavirus.

In an op-ed published on Sunday by the Nikkei Asian Review, former Hong Kong legislator, Nathan Law, who is also the founding chairperson of pro-democracy group Demosisto, wrote that if the new law is imposed on Hong Kong, residents “truly fear for our safety.”

“Our freedom of speech, assembly and political beliefs are no longer safeguarded by the city’s legal system. Torture and imprisonment inflicted on human rights defenders in China may occur in Hong Kong, with activists like Joshua Wong and myself likely targets of the authorities,” he warned.

By Jamie McGeever BRASILIA (Reuters) – Brazil’s central bank took aim at currency speculators on Thursday, but its first market intervention in almost three months appeared to be a reluctant one and the effects may be short-lived given a dimming economic outlook for 2020. The central bank waded into the currency derivatives market selling $1 […]

By Leika Kihara NARA, Japan (Reuters) – Bank of Japan board member Takako Masai said the global economy is on track for a rebound around mid-year as manufacturing activity picks up, signaling that risks such as the coronovirus outbreak do not warrant an immediate expansion of stimulus. In a sign of concern over the cost […]

By Steve Holland and Susan Heavey WASHINGTON (Reuters) – The Trump administration is weighing tax relief for airline, cruise and travel industries to help such companies cope with a growing coronavirus outbreak that has dried up bookings, a source familiar with the plan said on Friday. The move, which could include tax deferrals, is one […]