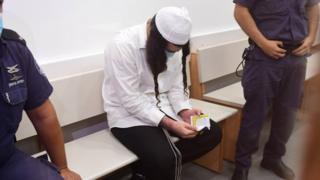 An Israeli court has convicted a Jewish settler of murdering three members of a Palestinian family in a 2015 arson attack in the occupied West Bank.

Judges found Amiram Ben Uliel threw a firebomb into a home in the village of Duma, killing Saad and Riham Dawabsha and their 18-month-old son Ali.

Ali’s brother Ahmed, who was then four, suffered severe injuries but survived.

Ben Uliel was also found guilty of attempted murder, but was acquitted of belonging to a terrorist organisation.

His lawyers said he planned to appeal against the convictions at the Supreme Court, arguing that Israeli investigators had forced him to make a false confessions.

The night-time attack on the Dawabsha family’s home in July 2015 sparked international condemnation and inflamed Israeli-Palestinian tensions, contributing to a rise in violence.

Saad, Riham and their children were asleep when masked assailants threw a firebomb through their bedroom window and daubed walls with slogans in Hebrew, including the word “revenge”.

Ali died during the ensuing blaze, while his parents succumbed to their wounds later in hospital. Ahmed spent months in hospital undergoing treatment for burns.

In 2016, Israeli prosecutors charged Ben Uliel with murder and a second suspect, a minor who has not been named, with being an accessory to murder.

According to the indictment, the attack was carried out in retaliation for the killing of a settler in a drive-by shooting one month before.

Last year, a court approved a plea deal in which the minor admitted to conspiring to set fire to the Dawabsha’s home.

Ben Uliel, who is 25 and from the settlement of Shilo, sat with his head down as he was found guilty of three counts of murder by the Lod District Court on Monday.

Israeli media reported that he confessed to the crime three times.

Two of the confessions were ruled inadmissible because they were extracted by physical force or soon after physical force was used, according to the Haaretz newspaper. The third was accepted by the judges, who said it was supported by detailed evidence, including his reconstruction of the crime scene.

Following the verdict, Ben Uliel’s lawyers said it was “a black day” for Israel, on which a court had convicted “a man whose innocence cries out to the heavens”.

Ahmed Dawabsha’s grandfather Hussein said: “The trial was for others, not for me.”

“It won’t bring back my daughter; her husband and my grandson won’t return, but I don’t want another child to be in Ahmed’s place,” he was quoted as saying by Haaretz. “We experienced a great trauma, and I won’t forget it in 100 years. I don’t want this to happen to another family.”

In a rare statement, Israel’s domestic security service, the Shin Bet, described the verdict as “an important milestone in the fight against Jewish terrorism”. Ben Uliel’s crimes represented a “severe crossing of a red line”, it added.

NEW YORK (Reuters) – Japanese bank Nomura <8604.T> has strengthened its investment banking team in the Americas, making five senior appointments to expand its coverage across financial institutions, healthcare and industrials, the bank said on Friday. The appointments will also result in the bank increasing its range of products in private debt solutions, it said. […]