(Reuters) – Summer weather is enticing much of the world to emerge from coronavirus lockdowns as centers of the outbreak from New York to Italy and Spain gradually lift restrictions that have kept millions indoors for months. 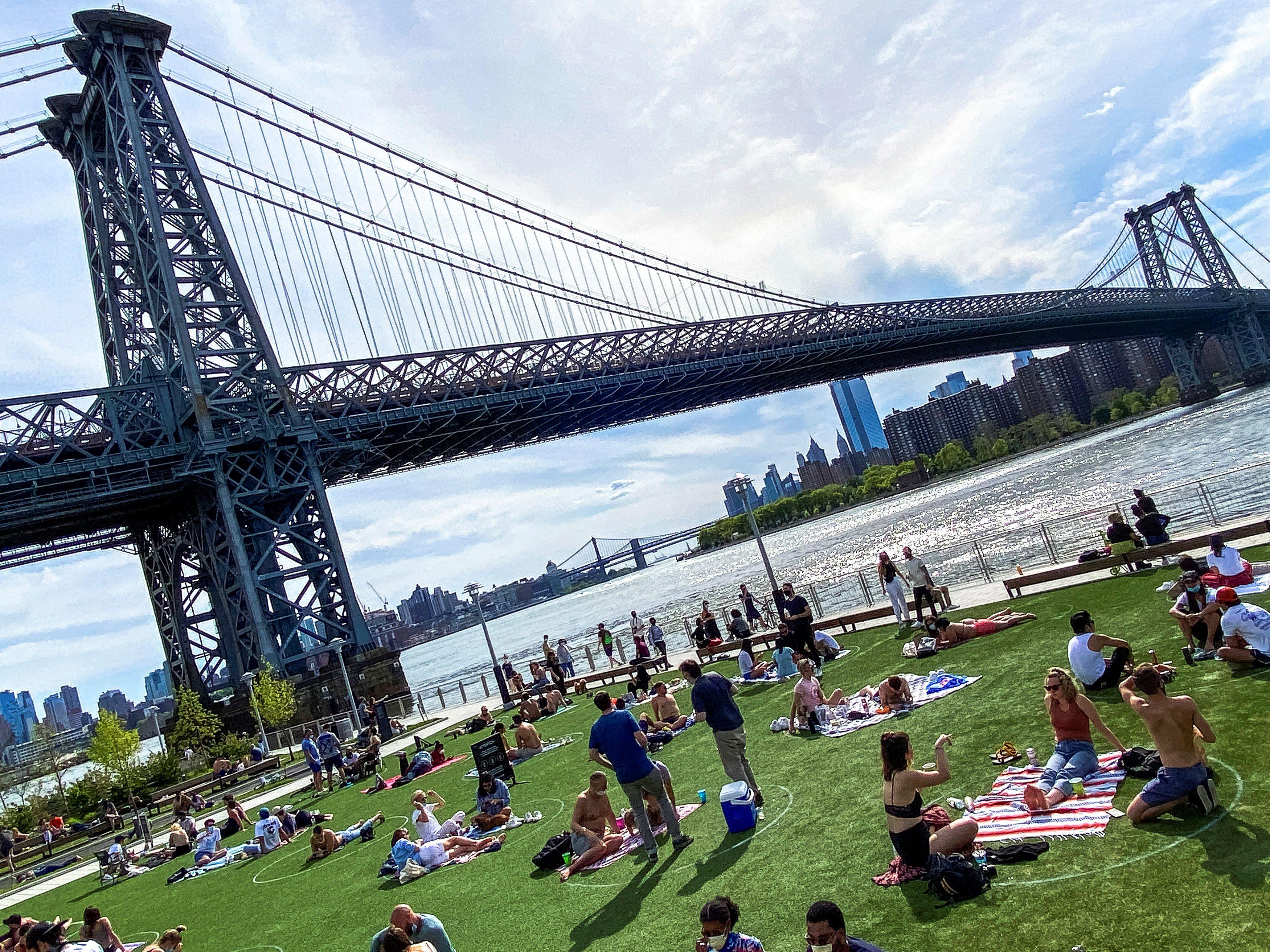 People are streaming back to beaches, parks and streets just as a heat wave hits southern Europe and spring-like temperatures allow Americans to shed winter coats. As they venture out again, most are keeping their distance and some are wearing masks. However, protests are also heating up from Germany to England to the United States, arguing the government restrictions demolish personal liberties and are wrecking economies.

Greeks flocked to the seaside on Saturday when more than 500 beaches reopened, coinciding with temperatures of 34 Celsius (93 Fahrenheit).

Umbrella poles had to be 4 meters (13 ft) apart, with canopies no closer than 1 meter as the country sought to walk the fine line between protecting people from COVID-19 while reviving the tourism sector that many depend on for their livelihoods.

“This is the best thing for us elderly … to come and relax a bit after being locked in,” Yannis Tentomas, who is in his 70s, said as he settled down on the sand.

White circles were painted on the lawn in Brooklyn’s Domino Park in New York City to help sunbathers and picnickers keep a safe distance. About half the people in the park appeared to be wearing some form of face covering as they congregated in small groups on a warm Saturday afternoon with police officers in masks keeping watch.

In Paris’ Bois de Boulogne, health training worker Anne Chardon was carrying disinfectant gel and a mask but said she felt a sense of freedom again for the first time after weeks of confinement.

“It’s as if we were in Sleeping Beauty’s castle, all asleep, all frozen, and suddenly there’s light and space, suddenly we can experience again the little joys of everyday, in the spaces that belong to us, and that we’re rediscovering.”

On the French Riviera, many who took a dip in the sea wore protective masks. Fishing and surfing were also allowed, but sunbathing was banned.

“We’re semi-free,” said one local bather sporting a straw hat as he strolled the rather empty pebbly beach in Nice.

Bathers seeking relief from the heat in Tel Aviv in the waters of the Mediterranean Sea and Jordan Valley mostly tried to stay apart.

“We hope that the hot water, weather, make corona go away,” said Lilach Vardi, a woman who came to swim in the Dead Sea in Israel, as a lifeguard tried to fry an egg in a pan in the scorching sand nearby.

In Tunisia, which reported no new COVID-19 cases over four consecutive days last week, people flooded into the streets and to recently reopened shops with little social-distancing.

Muslims are nearing the Eid al-Fitr holiday ending the holy month of Ramadan, when many celebrate with new purchases.

“I stayed at home for two months and almost went crazy,” said one woman at Tunis’ Manar City Mall. “I’m surprised by the crowd but I need to buy clothes for my children for Eid.”

But throughout the world, small pockets of protesters bristled at any restrictions. In the U.S. states of Michigan, Wisconsin and Pennsylvania, protests demanding states reopen faster have drawn demonstrators armed with rifles and handguns, which can be carried in public in many parts of the country.

Thousands of Germans took to the streets across the country on Saturday to demonstrate against restrictions imposed by the government, and Polish police fired tear gas to disperse protesters in Warsaw.

In London’s Hyde Park, police arrested 19 people on Saturday for deliberately breaking social distancing guidelines in protest at the rules, on the first weekend since Prime Minister Boris Johnson announced a slight loosening of England’s lockdown.

The scene elsewhere in the city was much calmer on Sunday as children climbed trees, kicked footballs and threw Frisbees in Greenwich Park. Couples and larger groups sunned themselves on the open lawns, mostly observing social distancing as they chatted and drank beer. 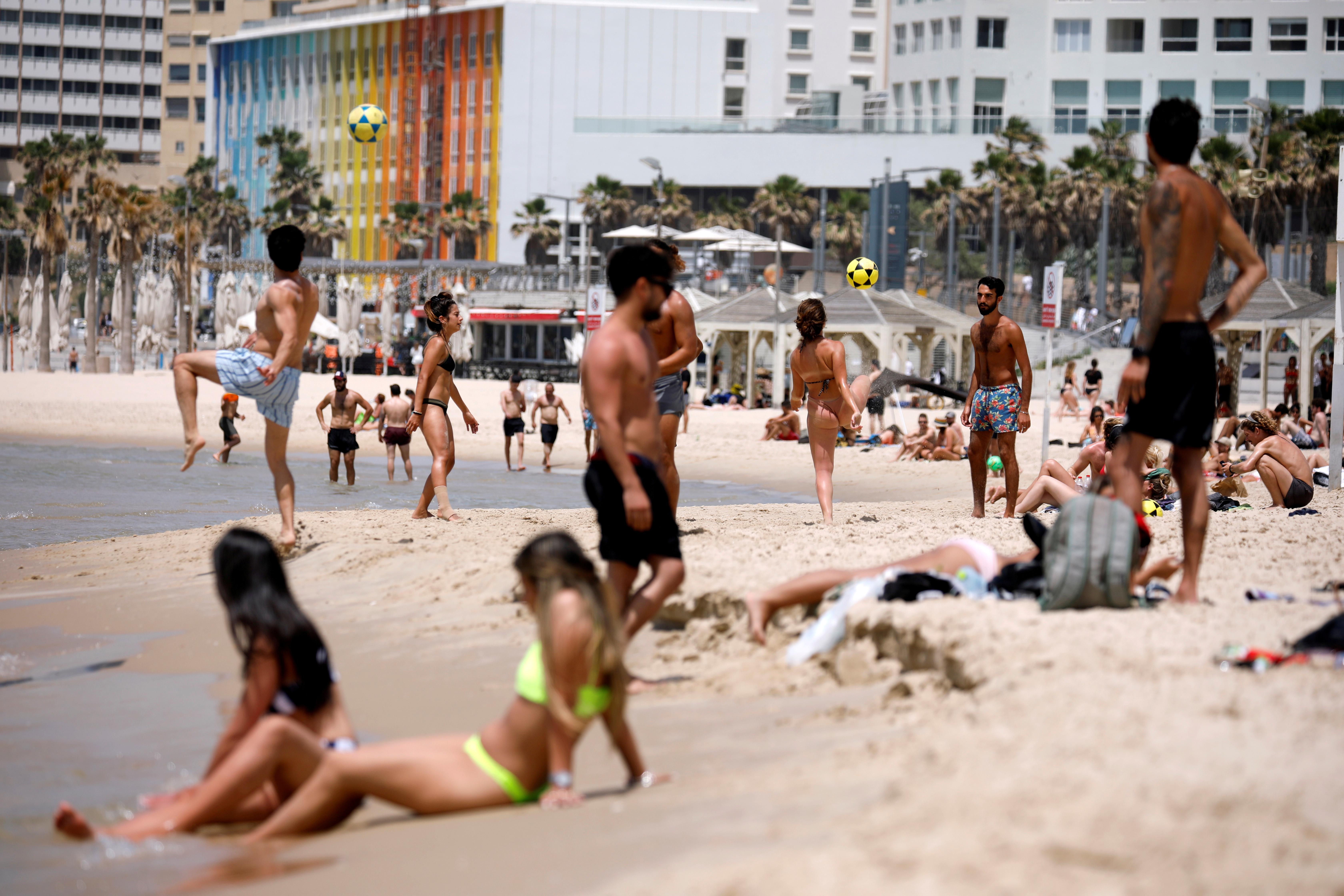 “We’re really happy to be out,” said Niko Privado, who brought his three brightly colored Macaws to the park, each tethered to a portable perch. “It’s only the second time we’ve been able to take them out (since the lockdown),” he said, watched by his wife and daughter.

Nearby, however, a woman working at an ice cream van said business was far from brisk despite the crowds and warm weather.

By Stephanie Kelly NEW YORK (Reuters) – U.S. crude tumbled 10.7% on Friday and posted its biggest weekly decline since the 1991 Gulf War as the coronavirus epidemic dried up global demand and as officials in Washington said an envoy would head to Saudi Arabia to deal with fallout of a Saudi-Russia oil price war. […]

By James Oliphant and Simon Lewis MANCHESTER, N.H. – Democratic U.S. presidential hopeful Joe Biden told reporters in New Hampshire on Tuesday he was headed to South Carolina later in the day – before the results of the nominating primary vote underway in the New England state are even released. His rivals continued to barnstorm […]

By Colin Packham and Swati Pandey SYDNEY (Reuters) – Australia will spend A$130 billion ($79.85 billion) to subsidise the wages of an estimated 6 million people, marking a third tranche of stimulus designed to limit the fallout of the coronavirus pandemic on the country’s economy. Prime Minister Scott Morrison said the six months of funding […]

Trump ratchets up criticism of China over coronavirus

Bank of England says top banks should not pay bonuses