In Paris, VE Day was supposed to be a huge event.

A military parade, a flypast, massive crowds. All of it cancelled.

Instead, VE Day focused on a single person – the president, Emmanuel Macron. He visited the statue of General Charles de Gaulle, to pay his respects to the man who led France after its liberation.

And he then made the short trip to the Arc de Triomphe to lay a wreath at the Tomb of the Unknown Soldier.

It was a sombre moment – France’s memories of the war are as much to do with the horrors of occupation as they are about the victory that followed.

Commemoration and remembrance are as important as celebration to many across this country, and across much of Europe.

As with every country, the number of people who can remember life during the war is slowly dwindling. But there are those who bear witness. And when they do, their voices still resonate.

In the northern suburbs of Paris, the sun is shining and you can get a glimpse of the distant Eiffel Tower as you drive along its boulevards. A tranquil setting, but we have come here to talk about war, fury and fear.

We arrive at the home of Jeanne Vanderschooten, a house by a small road, built on a hill, and Jeanne welcomes us with a smile. Glasses of water are brought out, along with her smile and memories. 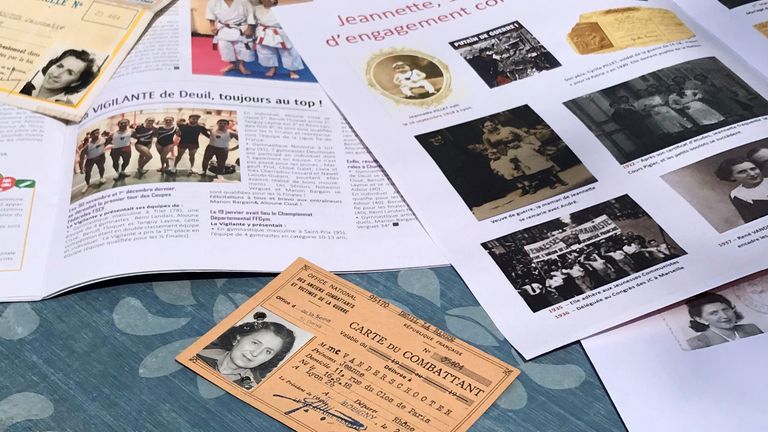 If you had to guess her age, you’d probably say Jeanne was in her early 80s. In fact, she will turn 102 later this year. She was born just as the First World War was coming to an end, and just as Spanish Flu was wreaking devastating damage on the world.

But it is the Second World War that shaped her. After the German invasion of her country, Jeanette joined the fledgling organisation that became known as the French Resistance. She spent the entire war writing and distributing leaflets opposing the Germans, and their puppet government.

“We moved at night,” she says. “During the winter, that was fine but during the summer we had to wait longer for it to get dark. We operated in pairs and I went with this man…” she points to a picture of a man, among the documents littered on her table, “My comrade. He was killed.”

The chaplains on the coronavirus frontlines

From FaceTiming worried families to helping doctors and nurses with “combat fatigue”, spiritual care workers in hospitals have been thrust onto the pandemic’s frontlines. Rocky Walker has come closer to death as a hospital chaplain in the coronavirus pandemic than he did as a soldier in the 1991 Gulf War. “It was very scary, very […]

By David Shepardson and Nandita Bose WASHINGTON (Reuters) – A U.S. judge on Thursday granted Amazon.com Inc’s request to temporarily halt the U.S. Department of Defense and Microsoft Corp from moving forward on an up-to-$10 billion cloud computing deal that Amazon says reflected undue influence by President Donald Trump. Amazon, which had been seen as […]

By Nivedita Balu (Reuters) – Coca-Cola Co’s <KO.N> quarterly revenue beat market expectations on Thursday, driven by demand for the beverage maker’s signature soda, flavored Cokes and Fuze teas, sending its shares up as much as 2.8% to a record high. The Atlanta-based company said fourth-quarter revenue growth was led by its trademark Coca-Cola, that […]

Lebanon central bank head: ‘nobody knows’ how much pound could slump on black market