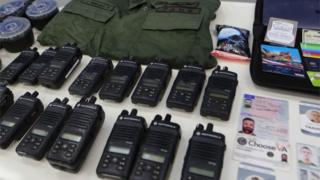 President Donald Trump has rebuffed suggestions the US was behind what appears to have been a bungled incursion into Venezuela to overthrow President Nicolás Maduro.

“If I wanted to go into Venezuela I wouldn’t make a secret about it,” he told Fox News.

Venezuela foiled what it said was a US-backed invasion attempt last weekend.

The US backs opposition leader Juan Guaidó and recognises him as the country’s legitimate leader.

What was the incursion plan?

According to Venezuela, a group of “terrorist mercenaries” landed by boat in the town of Macuto on Sunday. Thirteen people, including two Americans, were arrested. Eight armed men were killed.

The Americans seized were Luke Denman, 34, and Airan Berry, 41. They appeared in videos shown on state TV on Wednesday and Thursday.

Mr Denman, a former special operations forces member, appears to confess to “helping Venezuelans take back control of their country”.

He explains that he was hired to train Venezuelans in Colombia before returning to Caracas and taking control of an airport to allow Mr Maduro to be taken out of the country.

Mr Berry talks of taking specific targets, such as the intelligence service.

Mr Denman said he and Mr Berry were contracted by a Florida-based security company, Silvercorp USA, to carry out the operation. The firm is headed by Jordan Goudreau, an American military veteran who has openly admitted involvement in the operation.

The Washington Post on Thursday published a document which it says is a contract between Silvercorp and the Venezuelan opposition worth $213m (£170m) to invade Venezuela and overthrow President Maduro.

On Monday, Mr Guaidó denied having anything to do with Mr Goudreau. In a statement, he said he had “no relationship nor responsibility for any actions” taken by the US war veteran.

What has been the US response?

After the video of Mr Denman was broadcast, Mr Maduro said in a news conference: “Donald Trump is the direct chief of this invasion.”

Mr Trump, while again denying involvement, was clear that he would have done things differently.

Secretary of State Mike Pompeo has also denied US backing, but his use of the word “direct” has been seized on by some commentators.

“There was no US government direct involvement in this operation,” he said on Wednesday, while vowing to use “every tool” to get the Americans back.

Following the airing of the videos, a State Department spokesman said the Maduro government was conducting “a major disinformation campaign” which made it “difficult to separate facts from propaganda”.

Relations between the US and Venezuela are tense, and the US issued an indictment against Mr Maduro and other government figures in March on charges of “narco-terrorism”.

Who is Jordan Goudreau?

A Canadian-born former Green Beret who received a number of bravery awards, he served 15 years in the US Army, first in the infantry as a mortar specialist, and later as a special forces medical sergeant, the Washington Post says.

He was deployed to Iraq and Afghanistan twice between 2006 and 2014, army officials quoted by the Post say. Silvercorp USA was established in Florida in 2018.

The firm advertises a variety of services, including assisting victims of kidnapping and extortion. It claims to have “led international security teams” for the president of the US.

Silvercorp’s website advertises operations in more than 50 countries, with an advisory team made up of “former diplomats, former heads of security for multinational corporations, and the most experienced and viable military, law enforcement and intelligence professionals in the industry today”, without naming them.

Why is this summer so cold? Met Office explains why freezing temperatures are normal

BBC Weather: Temperatures set to soar across Europe When you subscribe we will use the information you provide to send you these newsletters. Sometimes they’ll include recommendations for other related newsletters or services we offer. Our Privacy Notice explains more about how we use your data, and your rights. You can unsubscribe at any time. […]

SHANGHAI (Reuters) – Debt-laden HNA Group has restructured jet orders with Europe’s Airbus in a compromise deal that includes an order for dozens of A330neo jets, two people familiar with the matter said, amid reports of a wider shake-up at the Chinese conglomerate. Airbus last month announced a surprise order for 40 of its A330neo […]

WASHINGTON (Reuters) – U.S. Senate Democrats on Wednesday unveiled a $30 billion plan to vastly increase nationwide testing for the novel coronavirus, and called the Trump administration’s efforts on this score seriously insufficient. “We have to ramp up testing so it can be done on a broader scale,” Senate Democratic Leader Chuck Schumer said in […]

Fiat Chrysler in talks with unions for production restart in Italy